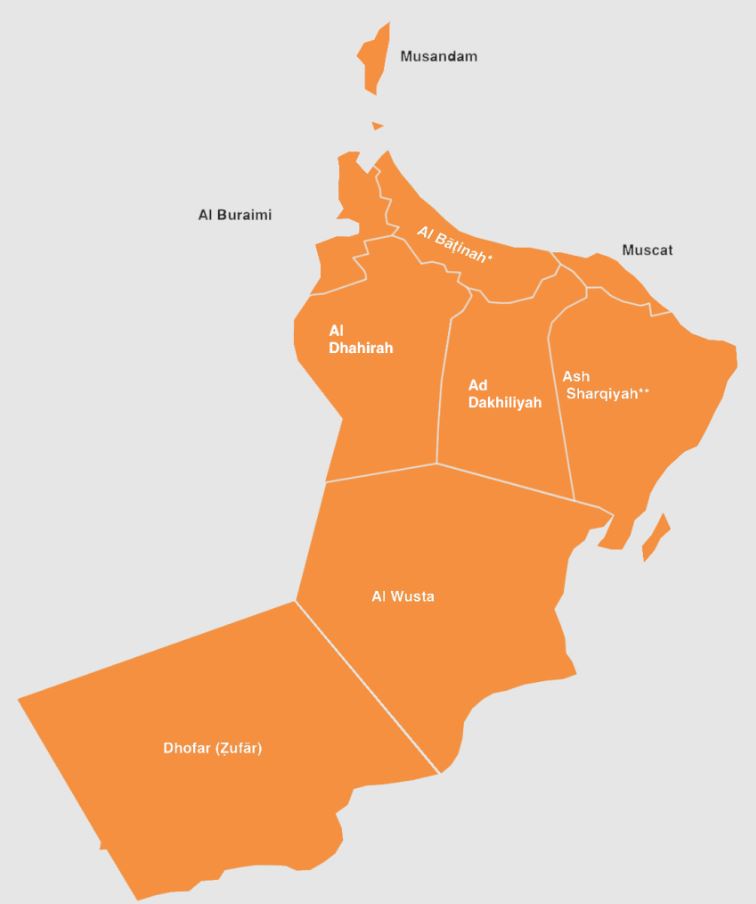 The Sultanate of Oman is in the Middle East, on the southeastern end of the Arabian Peninsula. It borders the United Arab Emirates in the northwest, Saudi Arabia in the west, and Yemen in the southwest. Oman has two exclaves separated from it by the United Arab Emirates, the Musandam Peninsula and Madha.
Oman is famous for its historic forts which are the country's most striking cultural landmarks. There are over 500 forts and towers which were the traditional defence and lookout points to deter potential invaders. Some of the best examples are conveniently located in the capital, Muscat. Jalali and Mirani forts stand at the entrance to Muscat Bay and date from the early 16th century.
Bahla Fort at the base of the Djebel Akhdar highlands is a UNESCO World Heritage Site and has 7 miles of walls. It was built in the 13th and 14th centuries when Bahla was a thriving oasis town.
Oman's rugged mountains offer some stunning scenery and probably the best opportunities for driving in dry wadis anywhere in the world. Many of the wadis have made roads (often unsurfaced but decent enough) while others require serious off-roading. You can easily get well off the beaten path into remote areas.
Huge desert dunes roll for as far as the eye can see at Wahiba Sands.
Oman's beaches are major breeding locations for various species of sea turtle. Masirah Island is the perhaps best bet where four species breed, including the largest number of leatherbacks anywhere in the world.
The country can boast not only vast expanses of desert, and hundreds of miles of uninhabited coastline, but also mountains of over 9000 feet.